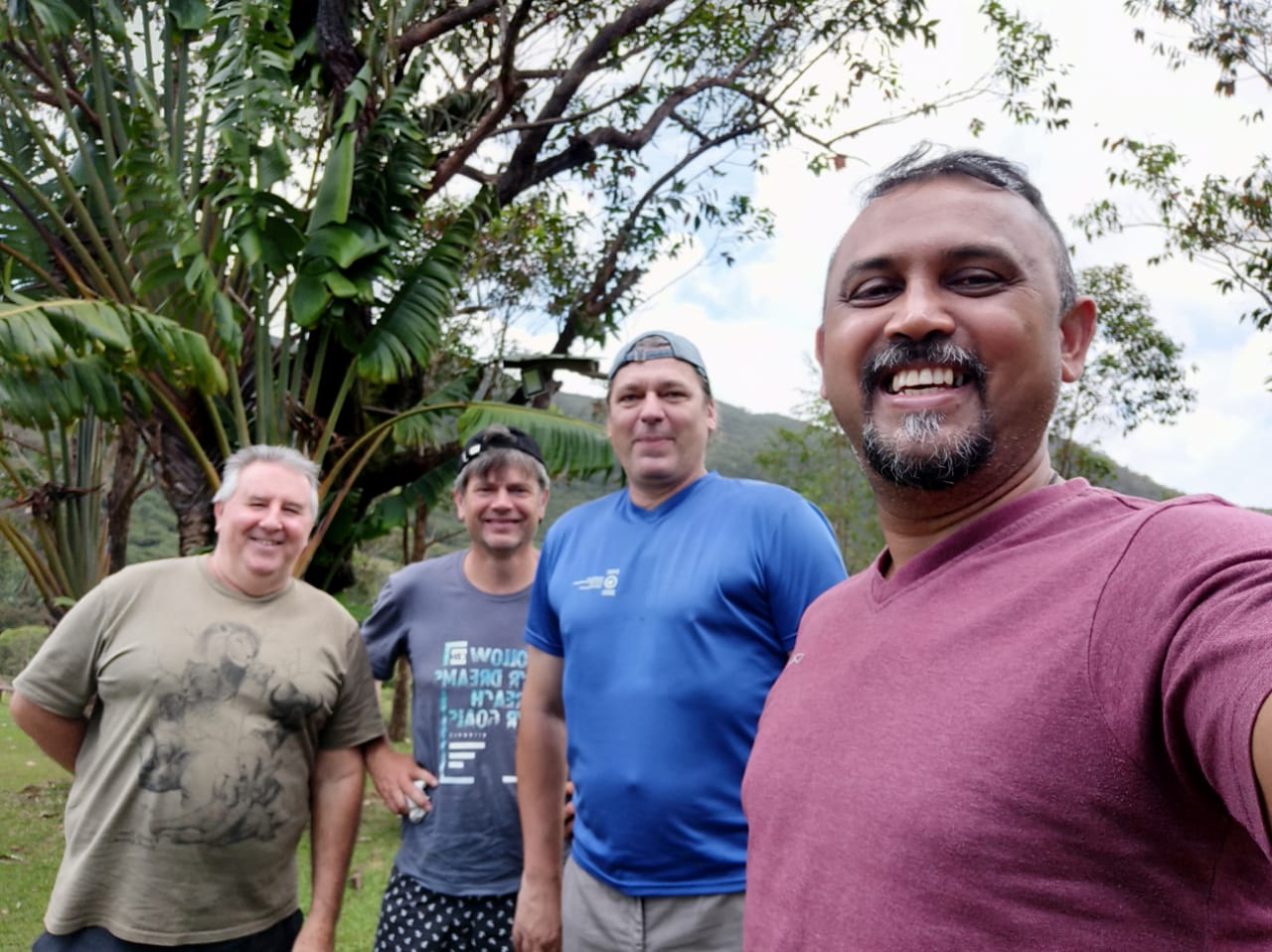 The mapping continued in Mauritius with the arrival of Petr Hranicka, international mapper.
Together with Roman, and with the unshakable help of John Domah of Orienteering M, the map works continued to Domain de Lagrave, fully supported by Mr Gilbert, the owner.

This is such an interesting area for orienteering. Are you ready to compete here? We are finalizing the preliminary info of Mauritius 3 days, next year in November 😎
Stay tuned! 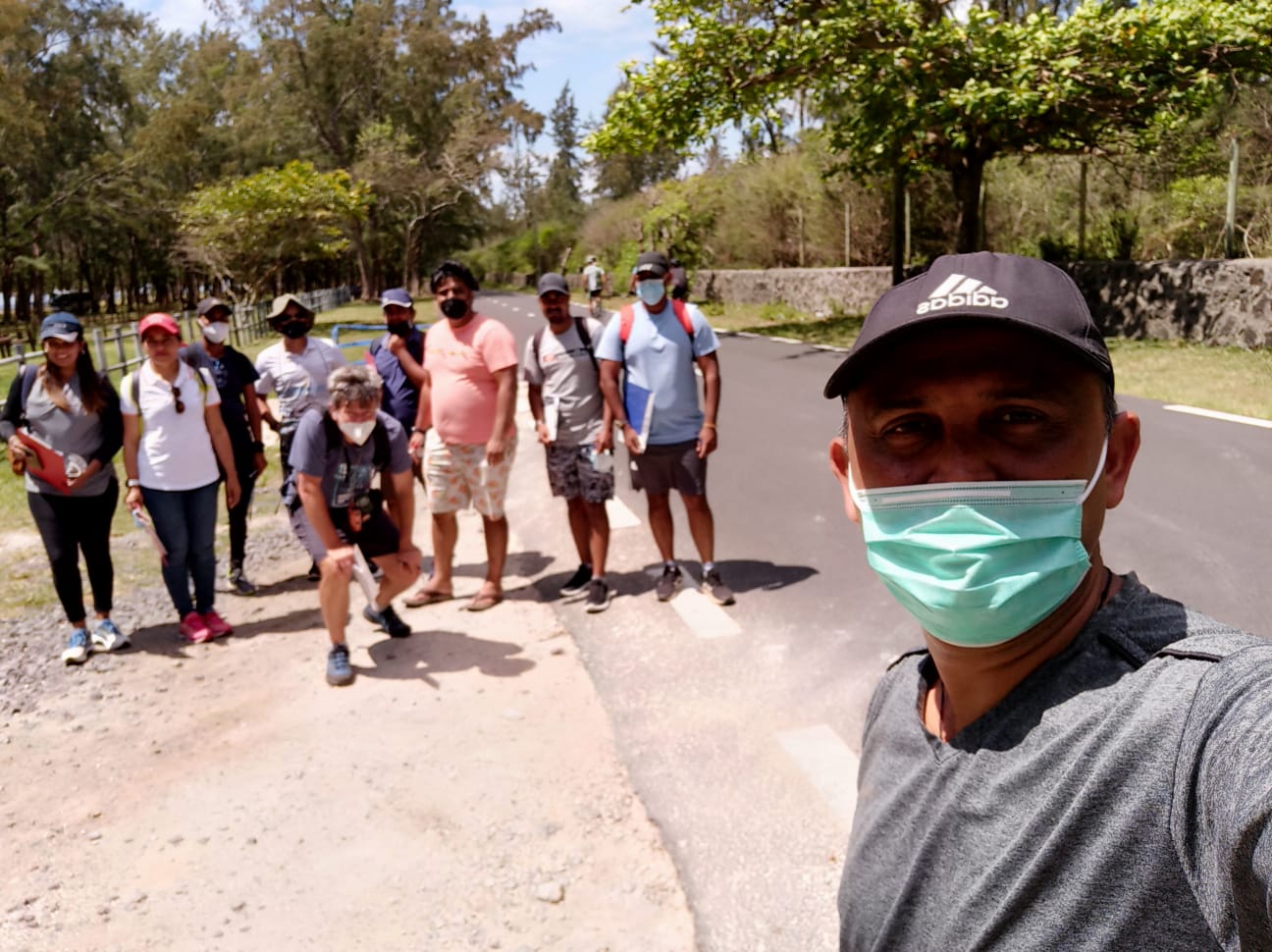 Roman Horky held a training on map making, while at Palmar beach. It consisted in one practical part in the forest and then a “question time” part.

All the interested people were already given the basic information about map making during the webinar from April to June, with the precious help of Andreas Kyburz, project manager of OCAD. 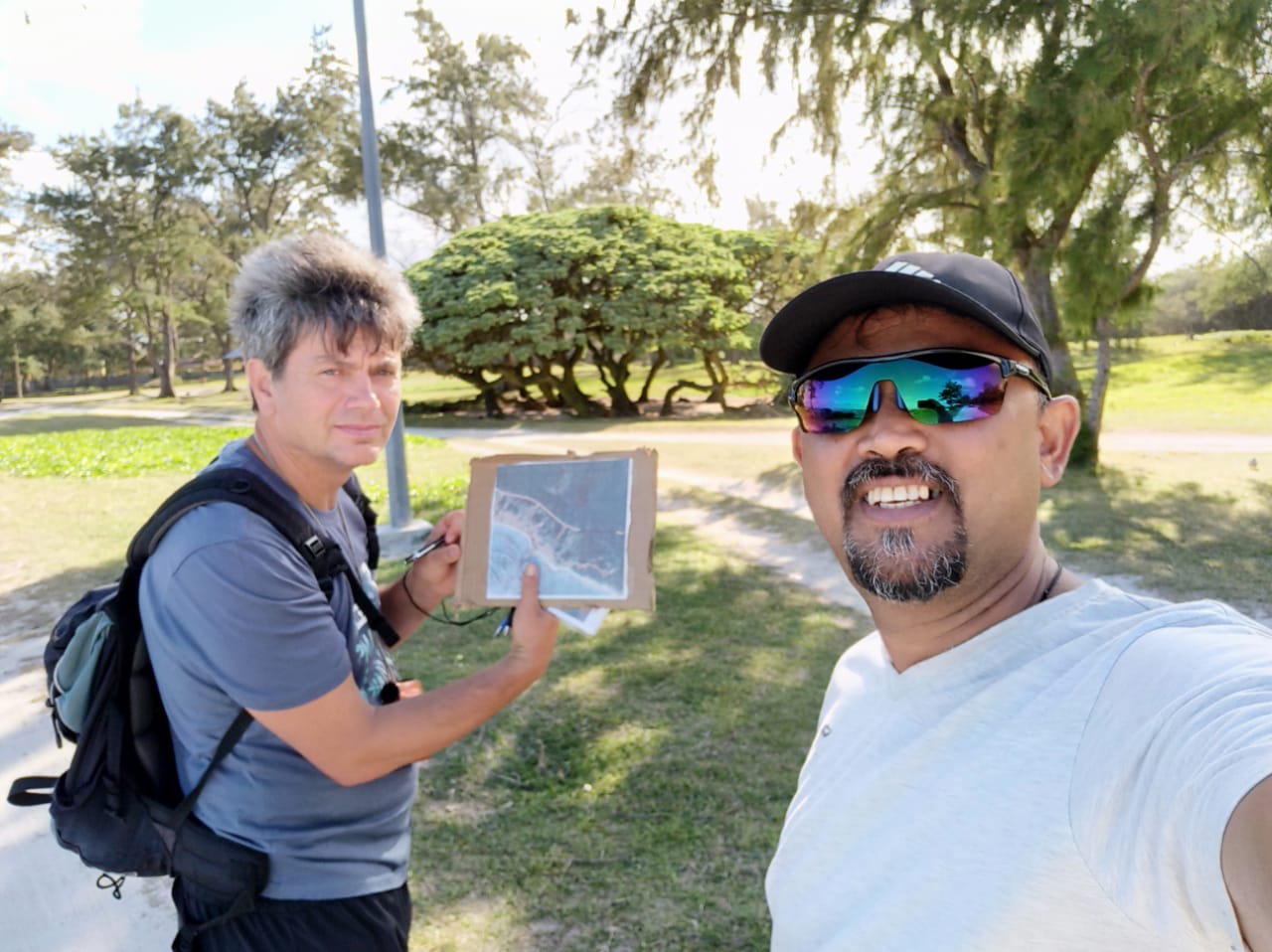 From 15th October 2021 Mr Roman Horky, a professional map maker, was in Mauritius to start to draw the first orienteering maps following the international standards.

He started from Palmar beach area, on the East side of the country.

11/10 was a field day, which started with a visit to Land and Housing – Cartography dept., looking for basic map of the interesting areas for orienteering maps.

After that, Jaroslav Kacmarcik – IOF GDC and Giulia Zenere – PWT Academy, together with Mr John Domah, Mr Vishal Luchmun, Mr  Khaiysaar Ahmad Soopun and Mrs Hima Seeboruth of the Mauritius Orienteering Federation, visited the offices of the Ministry of Education.

The third essential meeting of the day was scheduled with Mr. Hon Jean Christophe Stephan Toussaint, Ministry of Youth Empowerment, Sport and Recreation.

Mr Toussaint fully approved the idea of implementing orienteering sport in Mauritius, both at a school level but also at a community level; supporting the goal to create community clubs as recreational activity all around the country and for all ages, pointing that it is a sport that also suits to families.

The Minister sustained the projects of Orienteering M for Mauritians and also for tourists, and embrace the plan of an international event next year.

A meeting was also held with Mrs Vyrum Pillay Munien, Officer at The Duke of Edinburgh’s International Award, a project by the Ministry of Youth which has a component like adventurous journey. The Officer was interested in enriching the Award with Orienteering to develop skills such as map reading and compass work, necessary to achieve the Silver Award which requires 42km walk in 2 nights and 3 days.

A final meeting in the Sport Ministry offices was with Mr Nagalingum Pillay Samoo, Director of Sport, who welcomed the delegation and assured to be ready for the proposed projects.

The delegation then continued to Moulin de la Poudre Forest to check the existing map to be implemented. The area looks interesting, flat, with clear forest.

Being in the north of the Island, a visit to Pamplemousses Botanical Garden was to be done. It is a popular tourist attraction in Pamplemousses, near Port Louis, and the oldest botanical garden in the Southern Hemisphere.  It is populated with more than 650 varieties of plants among which are the famous Baobabs, the Palmier Bouteille, the ineluctable Giant Water Lilies, dozens of medicinal plants, a large spice garden and many more.

The venue is suitable for a sprint race and for some leisure time among its beauty.

The very long day ended with a meeting with Orienteering M in the evening, to discuss the short and medium term projects, the way to constitute officially the local Federation so to apply as temporary member of IOF, to implement orienteering both in schools and at a community level, and to support the organisation of an international 3-days event in november 2022. Are you ready?

On 10/10 a practical test for Cambridge International Examination was held in Bras d’Eau National Park for about 20 Educators.

Once again the PE were tested with Sport Ident System with the help of Mr Jaroslav Kacmarcik, on a course prepared by local course setters. After this experience, a short visit to the nearby beach was due.

Later on, enjoying the pleasant sunshine, the international delegates strolled in Palmar forest beach, an appealing area for a very fast sprint race, checking the tracks and the possibilities for an international race, as well as an area for school orienteering activities. 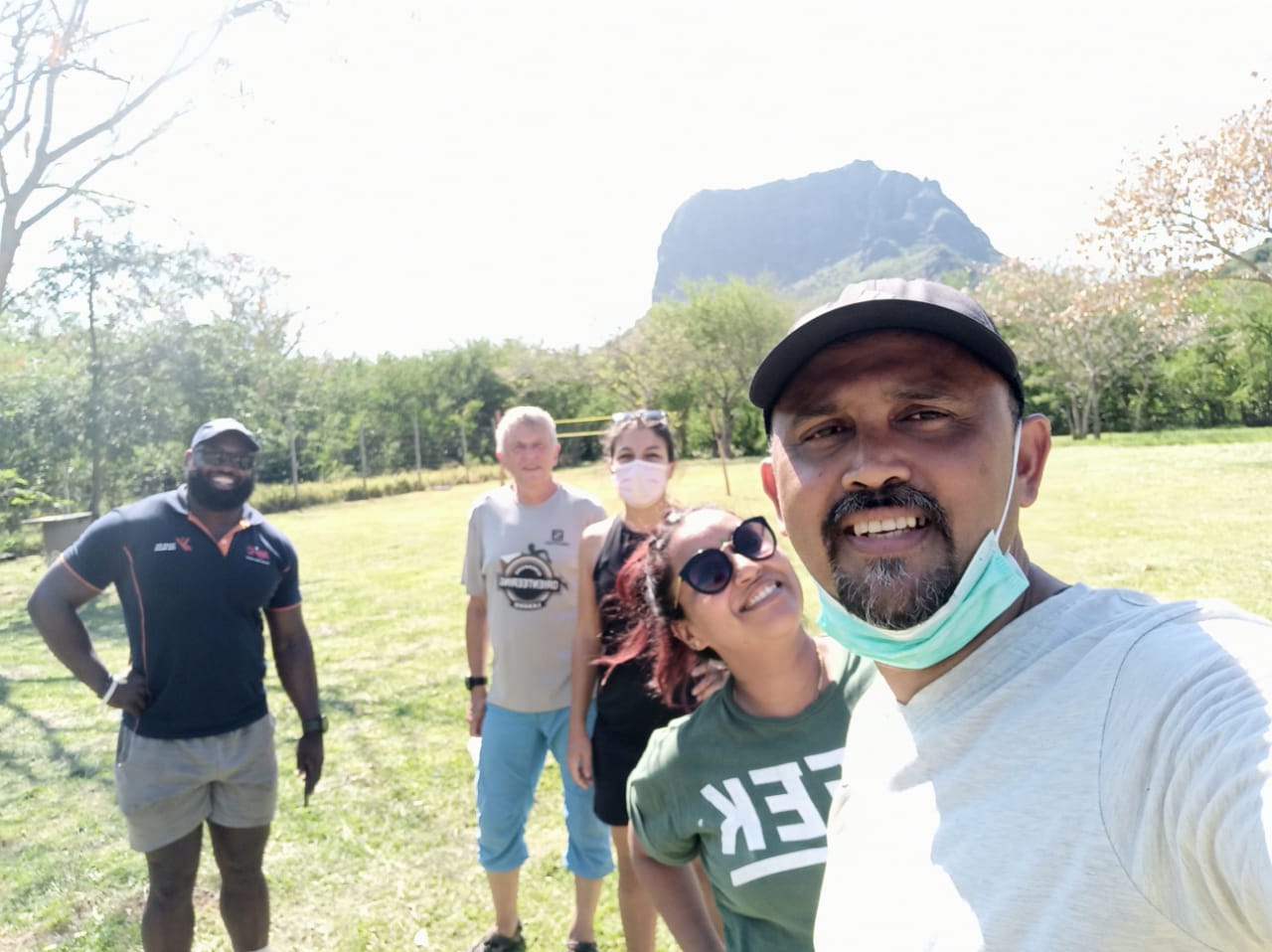 On 08/10 Mrs Hima Seeboruth and Mr John Domah of Orienteering M guided Mr Jaroslav Kacmarcik of IOF – Global Development Commission and Ms Giulia Zenere of Park World Tour Academy, thanks to the facilitation of NPCS, to visit Black River Gorges National Park from the entrance in Pétrin (Black River) and on an easy track up to the first viewpoint.

The park and its nature look stunning, the tracks are wide and provided with brand-new signs, from here the nature is very exposed to sunshine.

There are four entry points to the National Park. This nature reserve provides over 60 km of trails of different lenghts and difficulty – the longest of 14km, waterfalls, pristine rivers, picnic areas, wide canyons and dramatic mountain ranges, together with two information centres.

Staying on the south-west part of the Island, the delegation continued its journey to Green Village – Le Morne to meet Dr. Bernard Baptiste, Head of Youth on the Move and Elderly programmes, responsible for the Outdoor Education.

Dr Baptiste guided us through Green Village, a fantastic venue. The idea is to implement the activities in the village with orienteering, and have an orienteering map to be used also for schools, together with a punching system.

The delegation continued to Black River Gorges NP from the south entrance. The park on this side looks totally different than from the north. Very tall and shady trees and stream, on an almost flat terrain with stones, makes it look gorgeous.

Mr Gilbert Quéland, owner of the venue, fully supported the idea of hosting O-school competitions as well as an international O-event.

Domain de Lagrave suits all the requirements for a Middle Distance Orienteering race, being a mixture of open areas, forest, streams and paths. The venue is provided with a restaurant, as well as bungalows to rent.

The visit continued then to Bras d’Eau National Park, with a walk starting by the Entrance on Poste de Flacq, where lies the ruins of an ancient French sugarcane mill and the village settled around it, including a well.

The spot immediately catches the eyes because of the million lava stones composing the whole forest and the paths – being Mauritius created from a volcano.

In this site schools doing CI examinations conducted assessments on orienteering coursework in the last 4 years. The visit of the delegates was to prepare a map according to IOF standards, to be used for schools and trainings during the workshops.

In the last days, the first World Orienteering Day hit Mauritius for the very first time.

Many events were organized all over the country and hundreds of teachers and students were involved.

This success was made possible thanks to the great work of the new-born Mauritius Orienteering Federation, spreading the knowledge of Orienteering through a webinar held earlier this year, aimed to prepare dozens of Physical Educators to introduce Orienteering sport in their classes.

After this initial webinar of 10 lessons prepared by Park World Tour Academy in cooperation with IOF, a second webinar, prepared for a selected group of teachers, deepened the topic of map making.

Last week, when the schools were still on holiday, the Physical Educators gathered and trained together at the Quartier Militaire SSS (Girls).

During this week, with the resumption of the studies, the same PEs tested their students with orienteering activities. In the pictures and in the videos you can see the enthusiastic participation of many young orienteering beginners!

The cooperation between IOF, Mauritius Orienteering Federation and Park World Tour Academy intends first to develop orienteering in this beautiful country, and then to organize an International Orienteering event as soon as the Covid situation will allow it. Therefore, a first visit of IOF and Park World Tour Academy delegates is planned for the early October. During this visit, the PEs participating to the webinar will be trained in practice; another live seminar (including theory and practice) will be held for interested Mauritians, draft of maps will be finalized so the local schools could organize Orienteering events, surveys will be done to find the most suitable places for a future international Orienteering event, including map making according to IOF standards.